After a chance meeting 12 years ago in a pub car park Hilary & Mike knew that they wanted to be together and moved in together after  a few months. They knew that they would marry one day but last New year's Eve was to be the time when all the planning would begin.

Below Hilary tells us all about the proposal and their dream Wedding day in July this year.

The Proposal: Over the years we had been together we had conversations about marriage and thought we would marry 'one day'! After about five years we decided to get engaged at the Christmas. Another few years passed and we thought we were ok as we were. But as time went by we felt the time was right. On New Years Eve 2013 we had sparklers and Champagne in the garden ( just the two of us!).... Mike said "Wouldn't  it be nice if you were Mrs Kendall by next New Years Eve"? So in the January I started planning.

The Orangery set for the Wedding Breakfast

Why was Shottle Hall the perfect Venue: Originally we had thought we would have a very small "Do" so decided on a venue in Nottingham near to where we live. Unfortunately they let us down at the last minute and we were forced into cancelling. In a panic I emailed Shottle Hall saying" I know this is a long shot........ but do you have this date free?! "

Imagine my surprise when Sarah emailed straight back to say they had received a cancellation for our date only a couple of days before! We had never been before , and it was further to travel but when we saw the house and especially the lounge where we would marry we were overwhelmed. It was just perfect. A hundred times better than our original venue. We met Emma one of the wedding planners. She was so lovely to us and made us feel so welcome. We knew straight away it was meant to be. 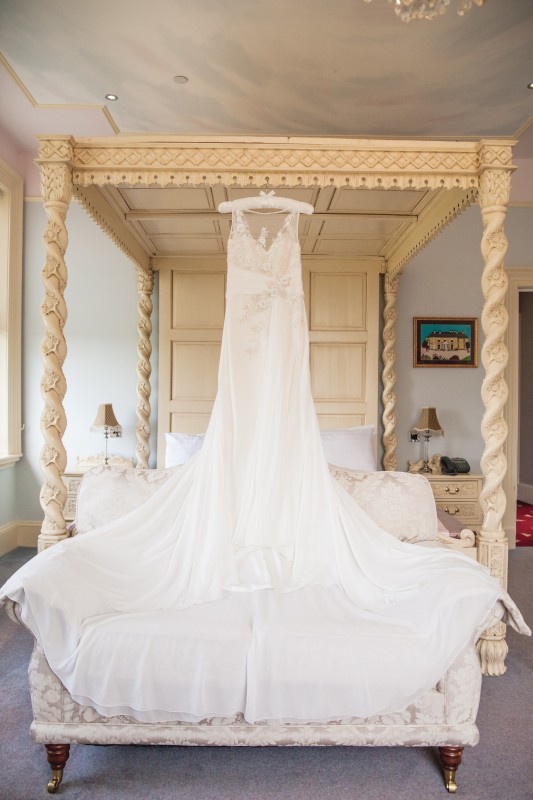 The Dress: Due to the fact that I'm an old age pensioner .... I was apprehensive about choosing a dress . I wanted it to be sophisticated and appropriate.. Not too low or strapless , or arms or shoulders showing and definitely no train!  Well the dress I chose was not what I expected! My daughter and I went to James Brides in Nottingham. I had always wanted to buy my dress from there as it is a beautifully old world style shop. There have always been beautiful dresses in the window. I remember it from when I first came to Nottingham from London as a student over 40 years ago! The ladies in the shop were delightful and I chose  "the one"! My Daughter ,Cassia myself and the ladies in the shop knew it was the dress! Simple, elegant and beautifully embellished.

Best Man, Bridesmaid , Ushers: Mike didn't want a best man , he chose a best woman instead: his youngest daughter Donna. My Daughter Cassia was my Maid of Honour and her boyfriend David assumed usher duties.

Members of the family and the Bridal party.

Our Ceremony: The ceremony was very emotional for both of us, more so than we had imagined it would be. It was just perfect. Sarah set up our music. She was smiling so broadly it was brilliant !
Our first song meant a lot to us both as it was a song that Mike had sent to me when we first met. "I finally found someone" by Barbra Streisand. When we spoke the words to each other everyone else seemed to melt away and it was just us two.

Photographer: Our photographer was Sara Hazeldine photography from Nottingham. I found her on the internet. She was brilliant as she was so easy to be around.. I kept forgetting she was working and thought she was a friend helping me out and looking after me! My guests, many of whom were Teachers, were very difficult to organise for group shots! 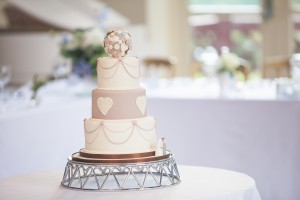 Cake: My photographer, Sara recommended Tasha of Glitter and Sparkle cakes, Nottingham. I met with her and discussed my ideas and she made my beautiful button theme cake based on the button bouquets I made for my Daughter and myself. It was exactly as I wanted . She also made a special fruit Grooms' cake for Mike! He was thrilled to find it at his place setting for our wedding breakfast.

Flowers: I had decided on a vintage theme with buttons and flowers combined. My main florist ,Art of Flowers on Derby Road Nottingham helped design the choice and structure of my arrangements using mercury glass perfume bottles and larger square mirror vases for the tables. A combination of white and blue English garden flowers with addition of wired button flowers which I made myself. 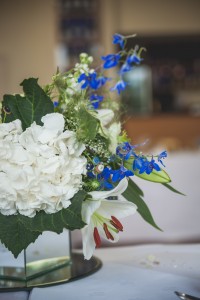 One of the pretty floral displays

I made Fifty buttonholes made with vintage and new buttons for all of my guests and also my own bouquet and my Daughter's. My bouquet included vintage buttons which belonged to my Mother, Grandmother and great grandmother : buttons from my Father's RAF and fire service uniforms and all sorts of buttons from my button box. The centrepiece of the bouquet was a 1960s metal flower brooch I remember my Mother wearing when I was a child. 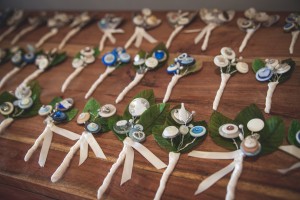 Hilary's Artistic Buttonholes for Every Guest

Our theme: I chose buttons as the basic theme; mainly because I have always collected buttons and also because having been born within the sound of Bow Bells in London, I'm a true Cockney girl and love my pearl and shell buttons! We even used small buttons to sprinkle on the tables mixed with crystals for a bit of sparkle.

Evening  reception: The Son and daughter of my friend who was Head of Music at the school where I was Head of Art, sang and played for us. They specifically learnt songs which I had requested including Mike's favourite song "The man who can't be moved "by The Script. David my Daughter's boyfriend set up the disco music, which I danced all night to! 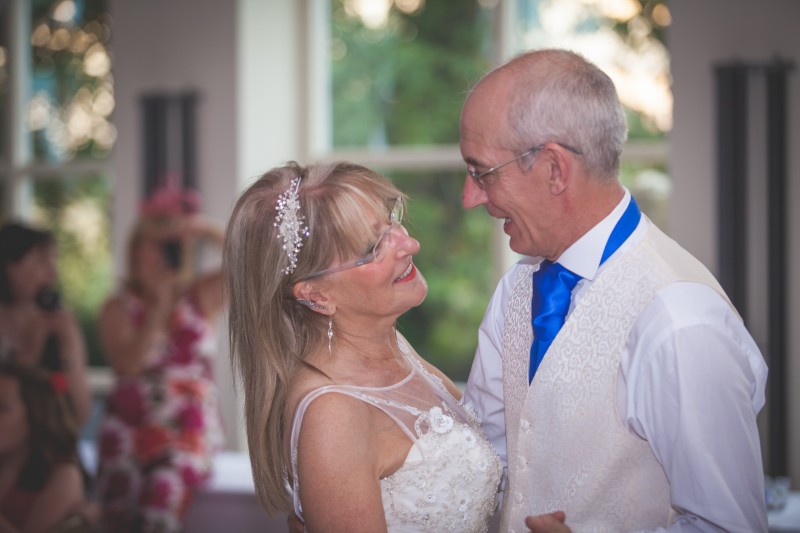 The First Dance as Man & Wife to Start the Night

I have to say it was a more than perfect day. Every aspect was faultless. Sarah and the team did a fabulous job. Their service was professional but friendly. Our guests all made similar comments about the Hall and grounds being a wonderful setting but that the staff actually make it special. Individually various staff went out of their way to support and guide our selves and our guests through the day. We can't praise or thank them enough. It was more memorable and special than we had ever imagined it could be.

Advice to other couples? Enjoy every moment.....it made us realise how fortunate we were to be surrounded by our family and friends.  Thank you Team Shottle for giving us the wedding day dreams are made of.

When Nikki Woodfine met her husband-to-be for the first time it was Friday the 13th – considered to...

Wishing all of you a very Merry Christmas.

Merry Christmas and a Happy New Year from everybody here at Shottle Hall.