A vintage wedding day for Beth and Jordan

Organising a wedding can be a full-time job for any couple – but Beth-Aimee Wilson organised her big day without any help from the groom.

Lance Corporal Jordan Bentley Watts was serving in Germany with the 3rd Battalion, the Mercian Regiment, until two weeks before their big day. So Beth-Aimee planned the whole event without him, with plenty of help from mum Sharon and her 12 bridesmaids.

Since the Derby couple got engaged 18 months ago, 23-year-old Jordan had been home for just two weeks at Christmas.

Beth, 22, said: “Because Jordan is in the Army I planned the wedding all by myself, and my friends and family were incredibly supportive. I couldn’t have done it without them, especially my wonderful mum.

“Jordan supported all my decisions, even when he was 1,000 miles from home. The day was just beautiful – I wish we could do it again.”

Proposal: I never, ever, ever wanted to get married. It just wasn’t something I ever wanted to entertain and Jordan knew that. But then he joined the Army and went away for his six weeks basic training – where he wasn’t allowed to get in touch with home at all and it was very hard. He rang me just before his passing out parade and told me how much it meant to him to know that he had someone waiting for him back at home. Then, when he came back, he asked me – just out of the blue one morning. I’d missed him so much and of course, I said yes! That was in March 2011.

Shottle Hall: We wanted to get married before Jordan was sent to Afghanistan and so we decided to get on with it, sooner rather than later, because we didn’t know when he would be going. One of my bridesmaids told me about Shottle Hall and it was the only venue I looked round because it was perfect. I sent Jordan a link to their website and he thought it looked fabulous too, so I booked it. We held the ceremony and reception at Shottle as we just wanted everything under one roof. Jordan’s family flew in from all over the world; his mother and stepfather from Dubai and his Uncle Lee from South Africa, and the accommodation at the Birchover Apartments was perfect.

Theme: I really wanted a vintage-themed wedding with afternoon tea, and I think the military really tied in with this idea. I was inspired by films and clothes from the forties and fifties and in general my style is quite wacky anyway.

The bridesmaids’ dresses were like tea dresses, and we added lots of other little touches – for instance I had been collecting vintage tea sets in the run up to the wedding and they looked brilliant.

Dress: I went dress shopping with my mum, but I didn’t want to spend a fortune. We went in lots of wedding gown shops all over Derbyshire, but because I’m only a size six I just felt as if I was being drowned in everything I tried on.

Eventually, we tried Monsoon in Derby and I got the most perfect dress which was everything that I was looking for: something in keeping with the vintage theme and quite understated. The dress was very simple and boho – a straight satin dress in champagne with silk straps and a chiffon overlay. It cost £225, and it was £25 for my shoes, which I thought was an absolute bargain.

Hair and make-up: I have a mobile hairdresser called Rachel Woodfine who did my hair on the day – as well as all the bridesmaids, my mum and two aunties! She started work at 8.30am for our 2.30pm ceremony! I wanted my hair down so that I looked like me. Claire Thomas, a make-up artist from Littleover, did our make-up and she really listened to me and did exactly what I asked. I wanted my make-up to look very natural and that’s exactly what she did. 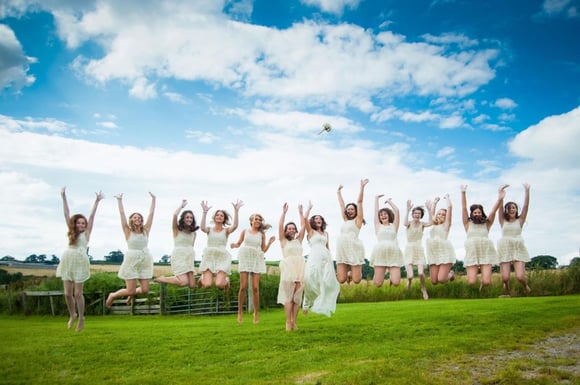 Bridesmaids: I had 12 bridesmaids – simply because I couldn’t choose between them. We both come from huge families and I didn’t want to leave anyone out, so the simple answer was to ask everyone. Because Jordan is in the Army I planned the wedding all by myself, and my friends and family were incredibly supportive and I couldn’t have done it without them.

All my bridesmaids had done something special to help me organise the big day. Whatever I asked of them, they delivered without question, and I really believe they are a special set of girls. On the day itself, having 12 bridesmaids made me feel like the best looked after bride in the world.

They all wore matching outfits from H&M which weren’t traditional at all - but little tea dresses in keeping with the vintage theme. The whole outfit, including dress, ribbon for the waist, bracelet and earrings cost £40 a girl. So it was only £30 for all 12 of them, which was such a bargain!

Groomsmen: Jordan’s brothers Colby Jensen-Watts and Brook Watts who are also serving in the Army, his cousin Samuel Johnson and friends Phil Poore and Max Harris. Jordan’s third brother Nick Watts, who is a Sergeant in the Army, was last minute best man, after his original serviceman friend was drafted in to provide security at the Olympics.

Suits: Because Jordan is a Lance Corporal in the Army, with the 3rd Battalion, the Mercian Regiment, he wore his No. 1 Dress and his brothers all wore their No. 2 dress. They all looked very handsome. 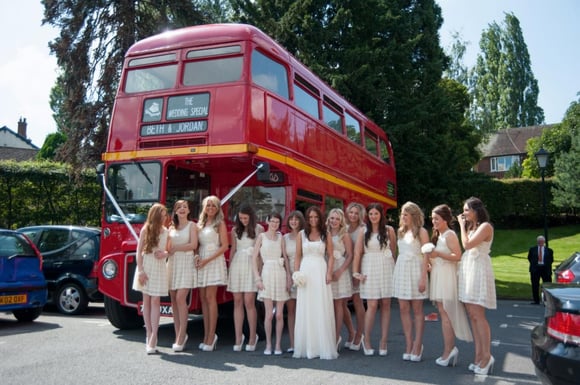 Transport: We had a vintage double decker bus from Midland Classic which first of all brought the bridesmaids and then went back and picked all the guests up. I arranged for a fleet of vintage minis to pick up Jordan and the groomsmen – they came from Derbyshire Classic Mini Owners Club . Jordan used to have a mini before he joined the Army, but sold it when he joined up, so this was a lovely surprise for him.

Ceremony: I was so nervous I arrived at Shottle at 12.30pm – even though the ceremony wasn’t until 2.30pm. Because my mum and I had organised so much of the big day by ourselves, I just wanted to make sure everything was perfect – which it was. I waited in the ceremony room, but the actual ceremony was outside. I was terribly nervous, especially because so much had gone into making the whole day perfect. I walked down the aisle to Love by Nat King Cole because it is a track I sing quite a bit and that Jordan loves. Meeting Jordan at the altar was amazing, the setting was magical and my boy was there in his uniform. I felt like the happiest girl alive. My Auntie wrote a poem about us which she read, it was very personal and meant such a lot because she had written it herself. It made me cry actually.

I couldn’t look at anyone during the service because I was so nervous and all my family laughed afterwards and said that it was the quietest I’d ever been!! We walked back down the aisle as husband and wife to This Will be an Everlasting Love by Natalie Cole.

Reception: Straight after the service we had drinks and canapés, while we did some photographs. Instead of having a formal reception we had afternoon tea, with lots of different sandwiches and cakes. Maria from Changing Chairs did all chairs, table decorations, the flowers and it all looked just fabulous. It was the first full wedding she was responsible for and I was absolutely thrilled with how she made everywhere look. My favours were little homemade chocolates with a picture of a bride dragging a groom on the wrapper! We choose to have our grandparents on the top table with us, and we both felt very lucky to have them with us on our special day. My dad gave a speech, then Jordan, then my stepdad Howard said some words, followed by the chief bridesmaid and the best man. At around 5.30pm we released 90 white balloons – one for each guest - with tags on them. Unbelievably, the next day a man in a small village in Norway got in touch to say he had picked up one of our balloons at 10.15am. He sent us a picture of the balloon and he has put us on their village website! 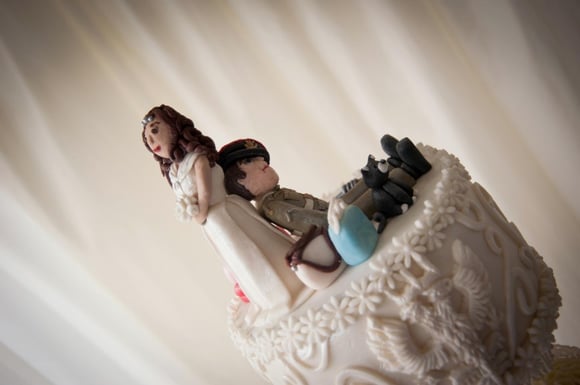 My Auntie made our cake

Cake: My Auntie made our cake – which was 350 cup cakes and then a top cutting cake. The cupcakes were four different flavours: chocolate orange, lemon meringue, white chocolate and raspberry, and vanilla. On the top tier she made two figures of me and Jordan, which are brilliant. Jordan is in his uniform and she even got the cap badge of Jordan’s regiment just right. I’m standing up, dragging Jordan along and there are loads of shopping bags and kittens (because our cat had a litter just before the wedding) around the side.

Evening: We had 115 guests in the evening and we enjoyed a gorgeous hog roast. Paul from Spirits High provided the music and asked us for a list of favourite music which he then stuck to faithfully – so everything he played, we liked! Our first dance was to You and Me by Lifehouse, which is a really old song, but we both loved it. At Christmas we had attended the Help For Heroes Ball and had a photograph of us done there. I had it blown up into an A1 poster and all the guests signed it with a little message for us. I didn’t really want some kind of book which would get hidden away and never looked at – whereas this will hang in our home and remind us of our wedding. 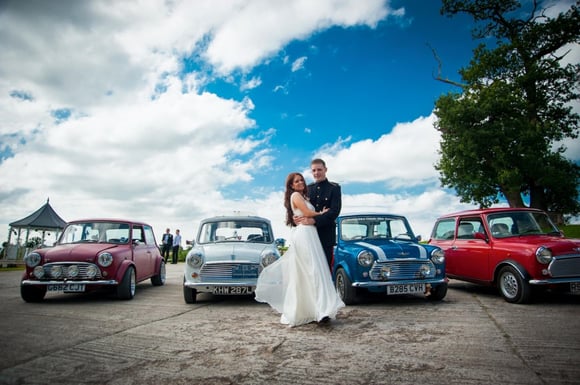 Photographer: I found Ezekiel Taylor on the internet and loved his style. I don’t really like formal pictures where everyone is posing and I don’t really like being the centre of attention. I wanted someone who would capture the day and not try and force everyone to do things they weren’t comfortable with. Ezekiel’s work was astounding, he really managed to get pictures of people exactly as they are, rather than just posed pictures.

Honeymoon: Jordan has gone back to Germany now and we couldn’t afford a honeymoon anyway. But we had a fabulous surprise from Jordan’s mum and stepdad, who have paid for us to fly over and visit them in Dubai next year. It will give us something to look forward to as well.

Childhood sweethearts Michelle McBurney and Simon Smith started dating when they were just...

Halloween 2012. I wasn't feeling going out, but my girls made me and Jason just happened to be the...