Childhood sweethearts Michelle McBurney and Simon Smith started dating when they were just teenagers - never guessing that almost a decade later they would be tying the knot.

The couple met at Belper School when a 16-year-old Simon asked Michelle, who was then 14 years old, out on a date.

“He asked me out around September time and I only agreed to go so that I would have someone to go to the prom with,” laughs Michelle, who works at Derby Garden Centre during the day and as a dance teacher in the evenings.

The couple, who both have a particular love of Christmas, tied the knot in a festive ceremony on December 21, 2011. 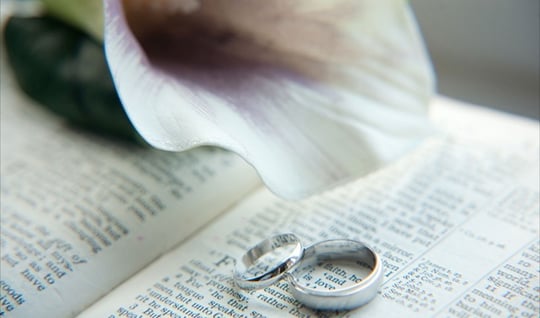 Proposal: We got a house together three years ago. One evening Simon walked in from work carrying a massive bunch of red roses and proposed! I was cooking the tea, not wearing any make-up and in my pyjamas – but it was lovely, because it was very low-key, nice and homely. It was quite of the blue, I had absolutely no idea. He had booked a table at The White Hart Inn at Moorwood Moor and it was absolutely perfect. Simon had already got my ring, apparently he had been into lots of ring shops with my sister. It’s a diamond solitaire, with five little diamonds on each side, set in white gold. It was from H Samuel, in Derby and I absolutely love it. We got our wedding rings from there too.

Shottle Hall: The first thing we booked was the venue. Mum and I went to look round loads of places in the vicinity, but none of them felt right. Some places just wouldn’t show us round unless we went back another day, another venue had no information to give us. But when we dropped into Shottle Hall they were setting up for a wedding,but nothing was too much trouble. Siobhan on reception showed mum and I round, and she was even happy for me to bring Simon back that evening to look round too. We originally liked the marquee, but when we decided to get married at Christmas we decided the house would be more Christmassy and warm.

Mum and I went to look round loads of places in the vicinity, but none of them felt right. Some places just wouldn’t show us round unless we went back another day, another venue had no information to give us. But when we dropped into Shottle Hall they were setting up for a wedding, but nothing was too much trouble.

Ceremony: We got married at Christ Church, in Bridge Street, Belper. We were torn between getting married at Shottle Hall or in church, but my mum was married at Christ Church and so that seemed a nice tradition to follow. Also, Simon really wanted to have a certain type of car, which he wouldn’t have needed if we’d had the ceremony and reception in the same place! We had Christmas carols instead of hymns and the whole service was very Christmassy which was lovely. I am a dance teacher at Vanessa Miller School of Dancing and Vanessa had organised 20 of our ballerinas to form a guard of honour outside the church as a surprise. They were all dressed in tutus and throwing petals – some of them even had time off school to come along – it was very lovely. 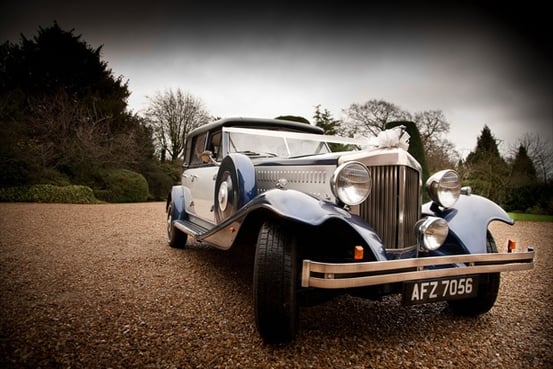 A Beauford car from Cakey Wakey was used in the film The Mummy Returns.

Car: Simon had his heart set on hiring a Beauford from Cakey Wakey. The particular one he wanted had been made by Beauford for Universal Studios and was featured in the film The Mummy Returns where it was driven by Brendan Fraser. We had champagne in the car, but because it was December and I was worried about losing the light we didn’t have a little drive around, but went straight to Shottle for our pictures.

Dress: My mum made my wedding dress for me, she used to make wedding dresses when she was younger. We tried on loads of dresses in shops and found there was one particular style I liked and so in the summertime she started to make it for me. It was quite plain with roses on the side of it and I had an ostrich feather stole from Monsoon to keep me warm. My mum also made me a veil and Vanessa’s sister, who is actually a milliner, also made me a hairpiece with pearls. Vanessa bought me my wedding shoes – which were a bight burgundy purple and gold, with big bows on them.

Bridesmaids: I had my older sister Kerry (24), my younger sister Robyn who was 10 and my niece Lilia who was two as bridesmaids. My older sister picked her dress and I bought a similar one for my younger sister, which mum altered to fit her. With the spare material from that, she made a dress for Lilia. We added netting and tulle to Robyn’s dress to make it look a little younger for her and we sewed on some jewels in to make them look glittery. They all had fur stoles to keep them warm. 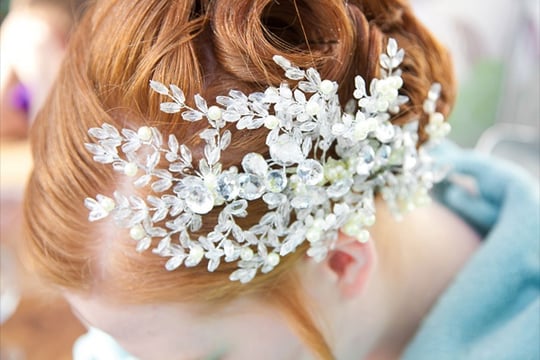 Hair and make-up: I’m quite particular about my make-up and so I did my own. I went to the NEC wedding show and there were lots of stalls selling make-up so I bought it all there. I also did both mums and all the bridesmaid’s make-up too. I had my hair done by Finlay’s Hairdressers, of Heage, as I know the owner. She also did the bridesmaids, mums and grandmas too! It was a very relaxed morning though – we all had a big breakfast togther and we weren’t stressed at all.

Groomsmen: All the men bought their own suits, rather than hire them, and so to keep costs down we went to Matalan. Luckily they had some really reasonable grey suits which had a purple lining which matched the bridesmaid’s dresses exactly. The ushers and my stepfather, who gave me away, all wore matching purple ties. And Simon had a silver cravat. Simon’s brother Adam was best man and the ushers were his cousin Barry, my sister’s boyfriend Dan and little brother Jay who is eight. 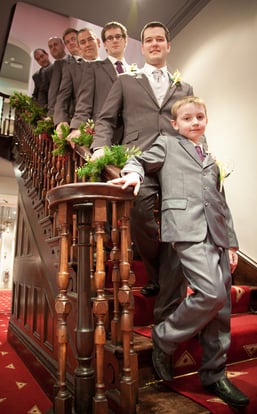 Simon and the groomsmen on Shottle's stunning staircase

Flowers: I arranged the flowers myself, but they weren’t fresh ones. I bought some artificial flowers off the internet, because I particularly wanted cala lilies. A friend hand-painted the inside of mine, as I wanted the sort which have purple running through the inside of the petals, and we also used iridescent paint and glitter to make all the flowers really sparkly. I think the house was covered with glitter by the time we left!

Reception: I gave my artist friend a blank canvas and she painted my table plan for me. She hid a tiny tap shoe in the picture so it was unique to me. Cakey Wakey decorated the tables for me with crystal trees and fresh flowers and baubles. When we sat down to eat it was going dark outside and so we had lots of candlelight and twinkling lights. My stepdad made wooden hearts which we painted purple and silver around the edges and Simon’s mum wrote our names and wedding date on the front. We hung them on the back of everyone’s chairs and they looked fab. I also made 22m of bunting which I hung up around The Orangery the night before, which really finished the room off. We had 70 guests for the day and I think almost every one of them commented on how nice the food was. We had mushroom tartlets to start, with because I wanted something warm, since it was the middle of winter. Then we had roast beef dinner. I nearly opted for turkey as it was Christmas, but I thought everyone would be having turkey in a couple of days anyway. We had dark chocolate mouse for pudding which was gorgeous.

When we sat down to eat it was going dark outside and so we had lots of candlelight and twinkling lights.

Evening: We had 120 guests in the evening and opted for the five buffet selection, which was delicious and plentiful. I’ve been to weddings before where there just isn’t enough to go round, but we actually had a bit left at the end of ours, which I was actually very happy about. One of my dancer’s dads is a DJ – Scott Parkin – and he provided the music and was absolutely brilliant. We really struggled to pick a first dance because we didn’t have a track that was ‘our song’ like a lot of couples do. In the end we opted for Look After You by The Fray because the lyrics were perfect. Simon has two left feet so we didn’t do a routine – in fact we made sure the ushers came up with a bridesmaid each after about 30-40 seconds.

Photographer: We asked a family friend Tony Scott Photography to do our pictures, which were a bit more of a challenge because of the time of year. He was actually at Center Parcs with his family and came away for the day especially to do our pictures. The week before the wedding, Shottle allowed us to come over at the same time of day that we‘d be doing the pictures, so we could check the light situation. Tony fell in love with the place and found lots of lovely spots. 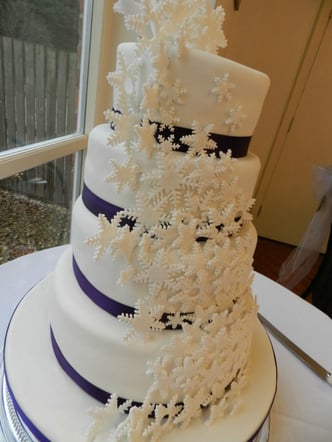 Cake: I know the lady who runs Cakes for Special Occasions, in Heanor and so I asked her to make it. I originally asked for a three tier white cake that I was going to decorate with crystal flowers. But I changed my mind and went for a four tier cake with a cascade of snowflakes falling down the front. The top layer was chocolate, then carrot, then lemon drizzle and Victoria sponge on the bottom.

Honeymoon: My mum is a travel agent and she booked for us to go to Barbados in the February. I didn’t want to be away for Christmas and so we had a mini moon in the Lake District after the wedding. I was actually full of cold and ended up having a spa day, just so I could have a lie down!

Before you begin researching wedding photographers, read this!

Ask the experts: wedding photography   It will take months, even years, to prepare for it – but...

How to choose a wedding day casino

Ask the experts: Wedding Casino Most couples choose between a wedding singer, a band or a DJ to...